Warning: "continue" targeting switch is equivalent to "break". Did you mean to use "continue 2"? in /nfs/c09/h02/mnt/140519/domains/cultivatingfoodcoops.net/lofc/wp2012/wp-content/plugins/gravityforms/common.php on line 1113

Warning: "continue" targeting switch is equivalent to "break". Did you mean to use "continue 2"? in /nfs/c09/h02/mnt/140519/domains/cultivatingfoodcoops.net/lofc/wp2012/wp-content/plugins/gravityforms/common.php on line 1150

Warning: "continue" targeting switch is equivalent to "break". Did you mean to use "continue 2"? in /nfs/c09/h02/mnt/140519/domains/cultivatingfoodcoops.net/lofc/wp2012/wp-content/plugins/gravityforms/common.php on line 1154

Warning: "continue" targeting switch is equivalent to "break". Did you mean to use "continue 2"? in /nfs/c09/h02/mnt/140519/domains/cultivatingfoodcoops.net/lofc/wp2012/wp-content/plugins/gravityforms/common.php on line 1176

Warning: "continue" targeting switch is equivalent to "break". Did you mean to use "continue 2"? in /nfs/c09/h02/mnt/140519/domains/cultivatingfoodcoops.net/lofc/wp2012/wp-content/plugins/gravityforms/common.php on line 2824

Warning: "continue" targeting switch is equivalent to "break". Did you mean to use "continue 2"? in /nfs/c09/h02/mnt/140519/domains/cultivatingfoodcoops.net/lofc/wp2012/wp-content/plugins/gravityforms/common.php on line 2831

Warning: "continue" targeting switch is equivalent to "break". Did you mean to use "continue 2"? in /nfs/c09/h02/mnt/140519/domains/cultivatingfoodcoops.net/lofc/wp2012/wp-content/plugins/gravityforms/common.php on line 2844

Warning: Declaration of GeoMashupPostUIManager::save_posted_object_location($post_id) should be compatible with GeoMashupUIManager::save_posted_object_location($object_name, $object_id) in /nfs/c09/h02/mnt/140519/domains/cultivatingfoodcoops.net/lofc/wp2012/wp-content/plugins/geo-mashup/geo-mashup-ui-managers.php on line 783
 Our Community Food Store Developing in St. Catharines - 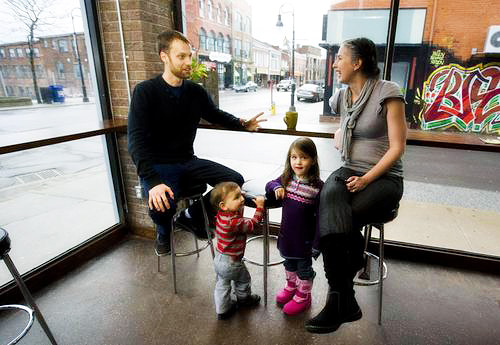 Karrie Porter and Brennan Finley are two of the organizers
behind a movement to bring a co-op grocery store to downtown St. Catharines.
With them are Porter’s children Remy and Mira. QMI Agency

If you build it, will they come?

Not everyone thinks so.

With nearly every Niagara municipality scrambling to bring more people to their downtowns, the idea of a grocery store being needed as a draw has been discussed repeatedly.

In St. Catharines, there’s a growing movement to bring a co-op grocery store to the downtown core.

In Niagara Falls, the development company trying to revitalize downtown is hoping newly renovated apartments in the area will attract a similar retail outlet.

Even outside the region, it’s the same story. Hamilton city council recently offered up a $650,000 prize for any developer willing to open a grocery store in its downtown.

But are supermarkets the answer to reviving downtowns?

“In St. Catharines, there were three or four grocery stores downtown until the 1960s,” he said. “Back then, downtown was the local shopping centre. The population was within walking distance.”

That all changed however, in the second half of the last century. The suburbs became the place to live and downtown shopping areas were replaced with malls.

“People suburbanized, families got smaller and places like downtown St. Catharines lost about two-thirds of its population,” Gayler said. “Of course, grocery stores suburbanized with them.”

“Stores are not stupid. They rely on a certain number of people to make the store profitable.”

Using downtown Toronto as an example, Gayler said large grocery stores can be successful, but it takes massive populations.

In Niagara, he feels small grocery stores could be the answer.

“In Europe they’re opening express stores downtown for the people that live there. Small stores are possible. It’s a matter of changing supermarket thinking,” he said. “Here, they’re going the other way. The medium-sized stores are being replaced with superstores.”

“There is a need in the inner-city for a grocery store that people can walk to,” he said. “There’s no reason why a small one couldn’t survive.”

That’s good news to Brennan Finley, one of the organizers behind the movement to bring a co-op grocery store to downtown St. Catharines.

The Our Community Food Store concept seems to be picking up steam. St. Catharines city council agreed to give the organizers $2,500 to help get the project rolling and then, last week, PenFinancial Credit Union matched that with another $2,500 in cash, plus consulting services and access to meeting space and volunteers.

Finley said the co-op grocery store idea makes sense for communities trying to revitalize their downtown cores because “the profit the co-op makes doesn’t leave the area. It stays in the community and benefits the members.”

Gayler said he agrees the concept could work.

“A co-op store is filling a niche that the big chains aren’t filling right now.”

Rick Brady, the director of community and development services for the Town of Fort Erie, thinks municipalities are being short-sighted if they think a grocery store will save a downtown.

“You’re talking about using a grocery store as a specific draw. But if you talk to people who run them, they’re not a draw, they’re built where people already are,” he said.

That’s a fact the companies themselves don’t shy away from. Opening a massive store in a location where the customer base is small wouldn’t make much sense.

“There are lots of factors that go into (deciding where to open a store), but there has to be a demand,” said Sarah Stover, who works in communications for Sobeys Inc.

And that’s why Gayler thinks it’s important for the communities themselves to take control.

“I think a city has to take ownership and we’ve failed to do that. We’ve let developers take advantage of our downtowns,” he said. “It will take time. But things are happening in downtowns. It will be niche retailers. It has to be something big supermarkets don’t do.”

“Large grocery stores want places that are easily accessible and have big, free parking lots. Downtowns have a difficult time competing with that. What you will see is more specialty items like bakeries,” he said.